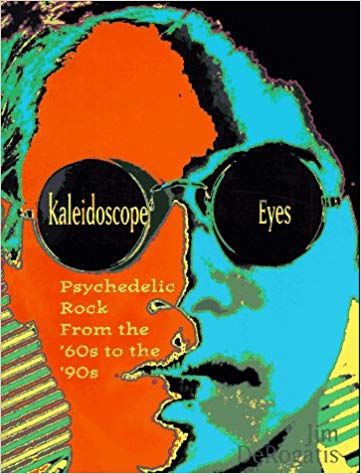 This was a book that I read originally in the mid/late 90’s, around the time it came out.  Overall it’s a really great read and anyone familiar with Derogatis’ column in Sun-Times or his time at Rolling Stone magazine, you know what to expect.  There are a lot of facts and that makes it a great text book on psychedelic music, but it also contains a lot of opinions which makes it an interesting read.  While he treads on some personal sacred cows (Sonic Youth, The Who), it’s hard to argue with the artists he praises.  While I don’t necessarily agree with him on his position on some bands, I respect that opinion as he does a great job backing it up.

The book was originally called Kaleidoscope Eyes: Psychedelic Rock From the 60’s to the 90’s, but in true Dero fashion, he changed the title at some point to Turn on Your Mind: Four Decades of Great Psychedelic Rock, because it references a better Beatles song.  I can’t argue with that.

I re-read my copy of the book a year or so ago and it inspired me to write up something about it, because honestly, it was the inspiration for this blog*!

Other stuff worth checking out by Jim Derogatis is his absolutely excellent and essential book on Lester Bangs, Let It Blurt: The Life and Times of Lester Bangs, America’s Greatest Rock Critic and his series on the 50 Chicago Artists Who Changed Popular Music, as well as tons of other great content to be found on his WBEZ page.

You can pick up Kaleidoscope Eyes or Turn on Your Mind at Indie Bound, Powell’s or The Strand (my favorite bookstore in the world). Don’t give your money to Amazon.  Support independent book sellers and record stores.

*I mean, actually it was my wife who was like “why don’t you just write a blog on the weird music you like, but really it was the depth and passion in this book that inspired how I curate this web site.

Throw this at your friends... hard:

What is This place??

A collection of stories related to the bizarre world of experimental music.  Some personal stories, some thoughts on records and sometimes just a link to something I’m into right now.  Mostly this is just a nerdy freak who discovered a world of odd sounds in the 90’s.

Who is getting weird